Showing posts from March, 2014
Show All

The Poorhouse and Poverty in Crieff in the late Victorian Period 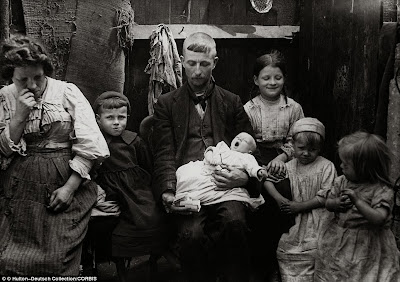 The stigma of social and physical handicap

Scotland  has  had a different Poor Law system to that of England . In 1579 the Scottish Parliament legislated enabling individual  parishes to remunerate the impoverished  living therein .It established a system which was not just an enumeration of the destitute but an examination  of whether these individuals could find alternative  means of support from other individuals or family members .They made begging and vagrancy public nuisances The Act intended  to remove the responsibility for the support of the poor from the church to the parishes .
Magistrates were ordered to build Correction Houses or workhouses so that beggars could be made to work. In 1843, a Commission of Enquiry was set up to suggest improvements to the Scottish Poor Law system. Proposals suggested included: Setting up a Board of Supervision and Parochial Boards ,the levying of a poor rate and joint poorhouses in urban areas. An Inspector of the Poor …
3 comments
Read more

One  often assumes  that  the Great  Plague which hit  London in the 17th Century did  not reach into the hinterlands  of Strathearn . There are  however a  number documented incidents which make it  quite  clear that the Plague or to give it it’s correct  designation - Bubonic Plague - was  indeed  around in these  parts of Perthshire at the same time .
The Bubonic  Plague spread  to Europe from China  in the 14th Century and  remained a scourge for a some  three  centuries thereafter . It mainly attacks  rodents  but fleas can pass the disease to humans and it has devastating affect once contracted  . The disease struck and killed people with terrible speed. The Italian writer Boccaccio said its victims often "ate lunch with their friends and dinner with their ancestors in paradise.". In the mid 1300s it’s affect in Europe  was devastating . In winter the disease seemed to disappear, but only because fleas--which were now helping to carry it f…
Post a Comment
Read more
More posts