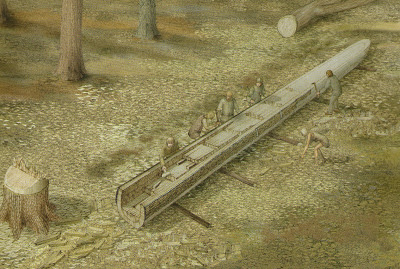 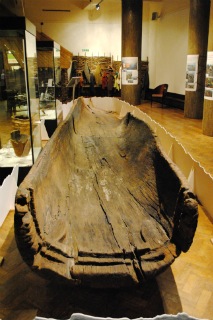 ﻿
The Carpow Logboat ﻿
It is quite astonishing  how much of  our early past  is being revealed thanks  to the fastidious  work of  our dedicated archaeologists and associates . In these blogs  we have  discussed the early Neolithic findings including the Crieff Cursus , the Forteviot  burial sites and the timber  round  houses revealed  during the preliminary work on the Beauly to Denny power lines . What   should  not  be ignored is  a quite astonishing  discovery  at Carpow where the River Earn joins up with the mighty Tay .
Carpow Bank is a small tidal shelf lying off the south side of the river .  The name Carpow appears on a many ancient maps There is a belief that here the Romans  established a boat  bridge providing a crossing to the north side of the Tay . This would have been close to their Fort at Carpow . According to  David Strachan’s  superb  book “ Carpow in Context ”( Society of Antiquaries of Scotland . Edinburgh 2010)  it is  clear  from the  study of many of the  old  maps of this area ( National Library of Scotland :   http://maps.nls.uk/ ) that the area  around this  part of the Tay and Earn were criss crossed  by numerous ferries allowing  good communication in an era  where cars , trains and busses did not exist !


Perhaps this is  why our  ancient relatives in all probability dropped  roots in what is now a very quiet back water . Their  communication  was primarily  by  water  and not  land particularly in view  of the wild  terrain and animal predators including bears , wolves and lynx . The craft they used  to cross the rivers and tidal waters  was termed a logboat .Again quoting from Strachan : “ The earliest known logboat  in Britain  is the oak fragment from Catherinefield in Dumfries and Galloway of around 2000 BC . The latest are late medieval  in date , but there are 18th century Scottish documentary  references  to their use . In Fox’s day ( Sir Cyril Fox , Director of the National Museum in Cardiff  .1925 ) all British logboats  were assumed to be prehistoric , ie pre Roman . Now that   a number of logboats from this country have been dated  scientifically , we realise that most  are of Roman or of medieval date , such as Carpow  is both unusual  and most welcome .” 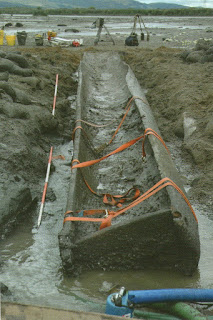 The logboat after excavation
Logboats have  been  discovered in this  vicinity on a number of occasions but  mostly in the   19th century . The Carpow finding occurred in 2001 when a Dundee metal detecting enthusiast Scott McGuckin  and two colleagues were searching the mudflats at low  tide primarily for Roman artifacts on account of the proximity of the site of the old Roman Carpow Fort . The three had  split up  to carry out individual searches  when McGuckin espied an object sticking up from the sand . The eagle  eyed searcher realised this appeared to be the stern of a logboat . He had  recognised it  from seeing   similar  one in the McManus Gallery in his  home town . The  find  was duly reported and as it  was located  within the geographical boundaries of Perth and Kinross , the onus  fell upon them to investigate the find further .


In 2001 ,the archaeological team which was organised by the Perth and Kinross Heritage Trust ( PKHT) developed an evaluation strategy which had  four main objectives


It  was determined that the age  of the Carpow  logboat was around 1000BC ( late Bronze Age )  and that it  was  constructed  from a single oak trunk . Although the  prow of the boat  was exposed above  the sand the greater  portion lay buried .When finally  excavated the  boat  was some 9 metres long .The boat was  carefully removed and transported  to the National Museum in Edinburgh where it was carefully restored. Such was the complexity of this  part of the project , that it  took some 5 years to complete . 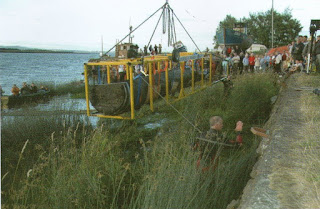 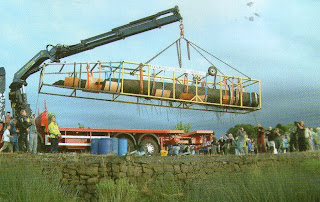 Careful you go !﻿
What was so interesting about the Carpow log boat that has  drawn the attention of  so many people ? Only two logboats of the Carpow vintage so far  discovered in the UK have had  fitted transom boards . What you may ask is a transom board ? This was inserted into the   main structure to assist with navigation particularly in tidal and strong flowing waters . From Strachan’ s book we find : “ A notable  feature of the Carpow boat is that she appears  to have been fitted with a dwarf transom aft of her main transom . This  may have been inserted to stem the flow of water that could have swept through the main transom when this boat had, on occasions ,  to be paddled  stern first ,  for example , when manoeuvring within a narrow river  . “


The Carpow  logboat was until recently on display in Perth Museum . It has now  been sent to Glasgow on loan to the Glasgow Museums’ Resource Centre   where it will be on display for the next 5 years . 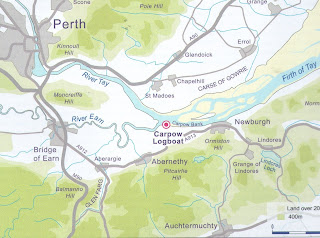 The location of the find
THANKS TO DAVID STRACHAN AND THE PERTH AND KINROSS HERITAGE TRUST AND THE BOOK " CARPOW IN CONTEXT " FOR MUCH OF THE BACKGROUND INFORMATION AND PICS . CHECK OUT THEIR WEB SITE :http://www.pkht.org.uk/
﻿ 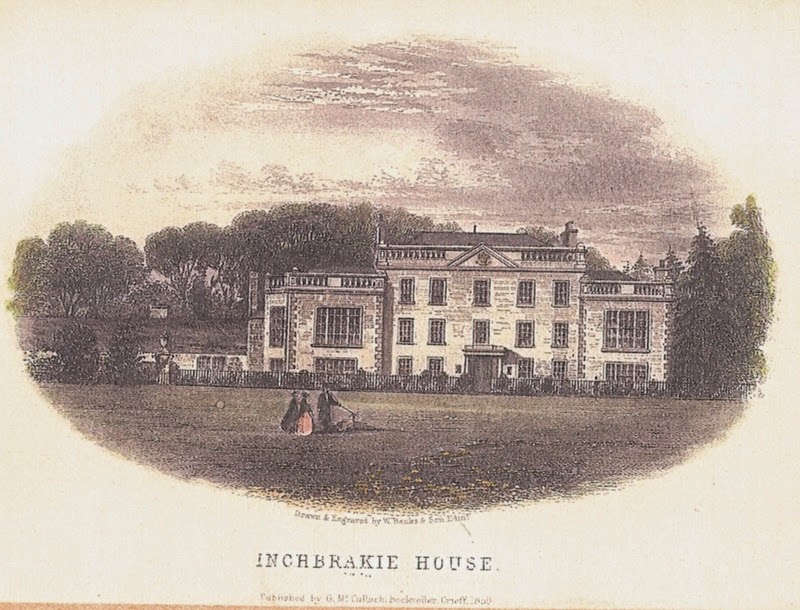 Inchbrakie House The Inchbrakie story is one of the sad tales of the Strath. This ancient family once were one of the dominant influences in Strathearn and their names appeared with frequent regularity as the centuries unfold. The Graeme family of Inchbrakie are however still around. There is a most excellent web site http://www.inchbrakie.com/ which provides a superb source of research and information into not only the family but also their domicile up until the late 19th century at Inchbrakie . Anthony Graeme , a present day descendant and a most charming person , lives in far off Devon but is a frequent visitor here in Strathearn .Interestingly , there are here in Crieff,  a couple of roads bearing that illustrious name .One wonders just how many of the inhabitants of houses in those specific airts know much about the original name ! We are, however ,  most fortunate that the family history of the Graemes was painstakingly recorded in a book Orr and Sable – a bo
Read more 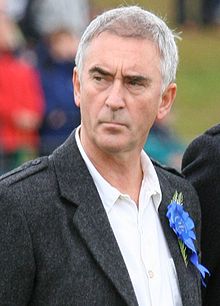 The success of Ewan McGregor has been quite phenomenal and despite the historical tendencies of this “blog” , it is relevant and essential to include something about him and indeed his uncle   Denis Lawson in my tales of Strathearn   . I happen to have know the family for a long time and so the following is more a personal commentary than a biographical synopsis . Having spent many a happy holiday in Crieff as a school boy and visiting my young brother in law Gavin who was a boarder at Morrisons , it was perhaps not surprising that we chose to settle down in the town in the 1970s to bring up our young family . As a member of the local Round Table I met Jim McGregor and his wife Carol and at the same time joined the local film club in which they both were leading lights . Carol ‘s dad Lawrie Lawson had a small jeweller’s shop in East High Street in what is now the Carpet Shop . They eventually moved down to West High Street and when Lawrie died his wife Phyllis conti
Read more

A written record of Comrie in 1791 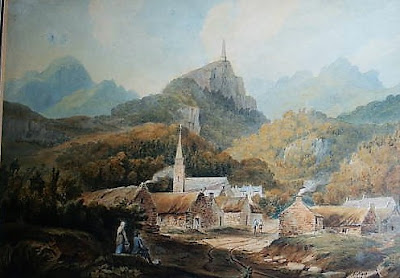 Back to the Past Comrie in the 1790s We are somewhat fortunate in Scotland to have   preserved on line the Incredible Statistical Accounts . The   first produced in the 1790s   were   co ordinated   by Sir John Sinclair of Ulbster in Caithness . He sent out a   structured questionnaire   to over 900 parish ministers   covering the whole of Scotland   They were asked   160 questions   in four sections covering geography and topography , population , agriculture and industrial production   and   some   miscellaneous queries . The general response   was   excellent     and a detailed portrait of the Nation   was laid   before   the General Assembly ( of the Church of Scotland ) in 1799 . We   now have an incredible   picture of the world in which our ancestors lived and worked . A time   which enables us   to   look at on the eve of both the   Industrial Revolution and the French Revolution . Further Accounts   were prepared   on the same basis   in the 1840s and 1950s
Read more